My previous post on Beer Pong got me to wondering whether it would be possible to combine the narrow Beer Pong table with Table Wrestling to enjoy two strange games at once.

Even if the result would be a bit of a gaming disaster it is still worth revisiting the majestic sport of Table Wrestling.  The Table Wrestling website is a delight and visiting it I found this picture showing how to enjoy the great outdoors. 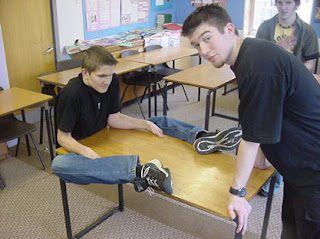 Even better is the picture below which shows a master of the technique that is known as the Sennewald Sh@g Special.  I have just been attempting this at my local IKEA on a small kitchen table named a Fuktar and can confirm that it is not easy.

Table Wrestling is a sport with a history that goes back to Roman times where slaves were forced to to mount their master's table and try to circumnavigate it whilst wagers were made...or it could be just an inspired made-up game by a group of bored sixth-formers in Worcester. Whichever it is, Table Wrestling is undoubtedly one of the greatest and strangest Wrestling events.

To play, simply get a table (a school size one works well, but one with more character can sometimes give greater opportunity for hand holds) lie on top of it (face down is best) then try and go 360 degrees around it without touching the ground with any part of your body. The most common technique is to stretch a hand all the way underneath to grab the opposing edge before the rest of your body follows and you fall to the floor. Then simply pull yourself underneath and then, hopefully, back onto the top. It's a little like keelhauling - only with a table and no risk of drowning.
Once you have mastered the basic move you can advance to travelling around the table length ways or if you are especially advanced in a figure of eight movement. For the hardcore table wrestler you could even attempt the 'altitude' version where you balance 1 table on the top of two others before going around it. If you are particularly speedy why not try and beat the world record which stands at 10 rotations in 1 minute!
at 9:29 PM 1 comment: