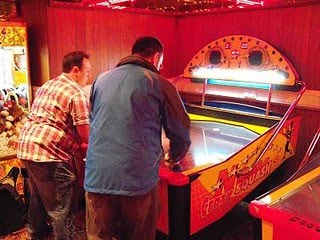 Here at Strange Games we enjoy hearing about unique and unusual sporting competitions and try to feature them as news items. Richard Gottfried (the man behind the greatest mini-golf blog Ham and Egger )  has brought this marvellous event to my attention.  Unfortunately it has just taken place but hopefully this little piece of publicity will swell numbers for next years event.
Richard writes, "This Undisputed International Worlds Crazy Air Squash Championships took place at 'The Buttons' on Saturday 18th September 2010, with six contenders hoping to be crowned the Global Champion of Crazy Air Squash and take with them the prized silver salver!"  The arcade game is basically Air Hockey but with both players shooting from the same side and bouncing the puck off the far wall. The current World Champion is Scott Lancley UK(seen on the left of the accompanying photograph)
Although highly skilled at mini golf Mr Gottfried could only manage a desultory 6th/last place.
If you haven't got a game nearby you could always buy one - only $3,700 here.
------------------------------------------------------------ 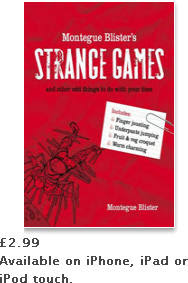 A better way to spend your money of course would be to purchase the Strange Games book - now released as an e-book on i-Books and available to download straight to your i-pad, i-phone and i-pod touch for only £2.99

A hilarious compendium of weird, wonderful, warped classic and new games.
Taken from the brilliant website http://strange-games.blogspot.com/, Montegue Blister's Strange Games is a pocket-sized compendium of the most hilarious, noisy, messy, and often vomit-inducing games ever written.
Finally, the official rules for all the games you played at school as a kid, such as Finger Jousting, Peanuts, Slapsies and Thumb Wrestling. But that's not all! Montegue Blister's Strange Games includes dangerous variations on old classics such as Extreme Rock Paper Scissors, Bloody Knuckles, Shin Kicking and Toe Wrestling, plus a whole host of new, weird and wonderful games like Face Ball, Crazy Stair Climbing, Watermelon Skiing and Mosquito Squashing.
Some games are violent, some are downright savage - and most involve a tiny bit of blood. But one thing's for sure - they're great fun! Montegue Blister's Strange Games is the perfect gift for Christmas and beyond.
Chapters in Strange Games in include:
Hand and feet games; Urban Games; Festivals; Party Games; Trick Games; Playground Games; Throwing & Propulsion; Sports; Stand off Games; Animal Games.
at 8:15 PM 2 comments:

Strange Games reader Irene Johnston has emailed to remind me that this year's Mangold Hurling event is rapidly approaching. Mangold Hurling is possibly the greatest of the vegetable throwing events, superior even to frozen pea throwing.
Mangold /Mangelwurzel Throwing:A traditional Somerset game that requires skill, strength and cunning. Mangold Hurling has a well developed set of rules. Players take it in turns to stand in a pitching basket and hurl a Mangold / Mangelwurzel at a Norman (A Norman being a pre-placed fixed position Mangold) The player that gets his Mangold the closest is declared the winner... it's what you get if you mix boules and strong cider. Mangold Hurling is usually performed during October each year.
Last year's event:

Here is Irene's email with all the details you need - the mass Agincourt event sounds particularly appealing:
One of the West Country's most bizarre events! The Ancient Order of Sherston Mangold Hurlers will hold its annual Hurl on Sunday 3rd October. Jimmy Doherty ('Jimmy's Farm') led his Root Vegetable Acrobatic Display Team to a convincing victory in the 2009 Hurl.

Play starts at 12 noon with an entry charge of £5 per team of three. There will also be a mass Agincourt hurl at approximately 12.37pm. Action takes place at Sherston Village Hall and field (SN16 0LH) with additional entertainment provided by live music, dancing, stalls, bar, BBQ and teas.Free entry and car parking for visitors.

Expect a great deal of extra, unscripted merriment. Those wishing to enter a team should contact the Keeper of the Challenges Mr Paul Ormiston on 01666 840694 Singles competition entry is £1 on the day and there will be a free Children's Hurl.
at 6:36 PM No comments:

Strange Games welcomes contributions from readers...the weirder the better. However, reader Matt Stiff has gone the extra mile and actually produced an illustration to go alongside his game: Cheesy Daddy Cans - a delightfully messy and moronic version of football skittles. It is possibly the ideal game for Wayne Rooney - it might increase his chances of scoring.
Matt writes,"I thought you might like to know 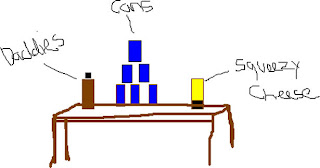 about a great party game that myself and a few friends invented. It's called 'Cheesey-Daddy-Cans' and it goes like this.... Place a coffee table in the centre of the room (or outdoors). On top of the table arrange a bottle of squeezy cheese, a bottle of Daddie's Brown sauce and a pyramid of 6 empty drinks cans. The idea of the game is to kick a 99p plastic football (available at all good seaside bucket and spade merchants) at the array of table top items and knock them off. However, to get points, you need to knock the item clean off the table. Any item left on the table but in a dishevelled state will result in points being deducted. The difficulty with this game lies in the unpredictable flight path of such a cheap and nasty plastic football. It is a great way of passing time on a rainy day and as skill levels increase so does the ferocity of the competition! Scoring is as follows: Daddies sauce - 3 pts, Squeezy Cheese 2pts and Cans 1 pt each.
All items carry a 1pt deduction if lying on the table after three attempts ( three attempts per player) A bonus of 20 pts is awarded if there are no items left on the table and knocking the table over is cheating, a re-kick must be enforced."
Matt doesn't say in his e-mail what his day-job is, but if it isn't something related to either game or graphic design I'll eat my hat.
Send your strange games to : montegue_blister@hotmail.co.uk