News from the world of Finger Jousting

Strange Games doesn't usually have news items but when the fledgling hand sport of Finger Jousting holds its inaugural tournament then it's an event that needs celebrating as well as bringing to the attention of strange games fans everywhere. 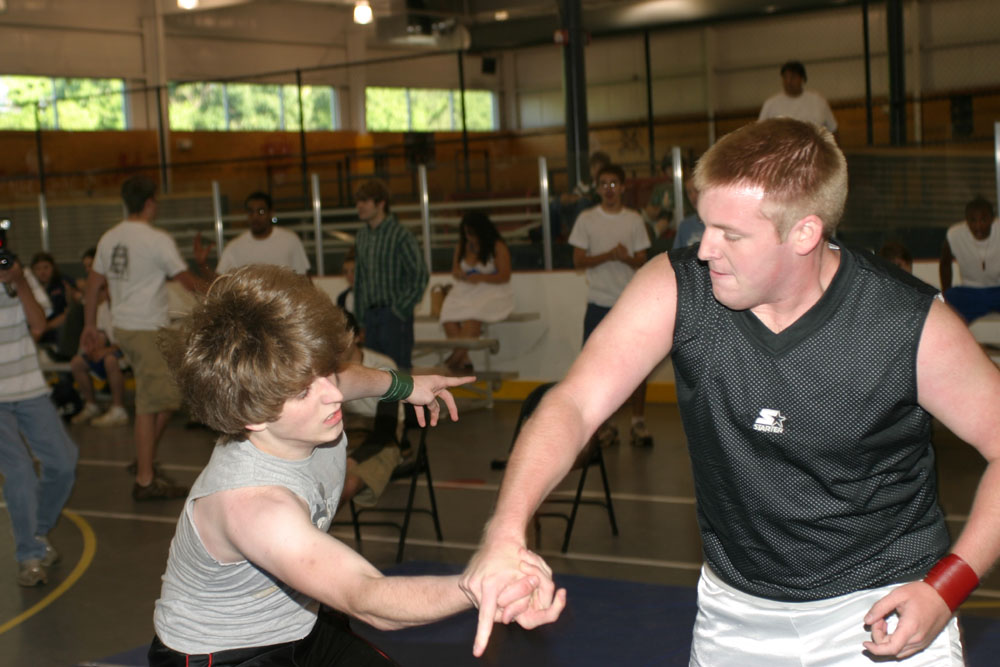 In Finger Jousting two players stand facing each other and clasp their right hands together as if about to arm wrestle. Then on a given command each player extends his index finger (his "lance") and battle commences. The objective is to jab your opponent before he jabs you. At no point may the players' hands lose contact with each other.

The Inaugural LaGrange Sanctioned Invitational Finger Jousting Tournament took place on May 18th in La Grange, Georgia. In a tense 12 round final third seed K-Money beat first seed Top Gun with a 'lance' to the head in the twelfth round. For a detailed report see World Finger Jousting Federation report on the event.

My previous post reminds me of a game once common in the nation's playgrounds: Dodgems. It could best be described as competitive

pogo-dancing although I remember playing before the subtle art of pogo dancing was invented. Dodgems is a stupid game that deserves a comeback.
For two players or preferably more. Everyone folds their arms and stands with their feet together. Then, simply, everyone starts jumping up and down as wildly as they like, the objective being to knock your opponents off their feet while retaining yours. Any player either unfolding his arms, not bouncing with their feet together or falling over in a heap are eliminated. Last Dodgem standing wins.

Dance, Fight or Windmill is a bizarre children's challenge game which is childish, stupid, pointlessly violent and obviously great fun for children and adults alike.

For two players. One challenges the other to 'Dance?', 'Fight?' or 'Windmill?' Player two ponders his three choices then declares his favourite. If 'Dance' is chosen then both players must stand on one leg, then remaining like this spin around quickly for as long as possible. The first player to fall over or put a foot down loses. If 'Fight' is chosen then both players again stand on one leg but this time they also fold their arms tightly and have a hopping fight - hopping at each other as hard as possible, trying to get the other to fall. The first player to either unfold his arms, put his foot down or just fall over, loses. If 'Windmill' is chosen then player one 'windmills' both arms and to win player two has to pass through this limb-windmill without being touched.
strange games no:121
at 6:22 PM No comments:

My previous post regarding the amazing distances and number of times that experts can skim stones prompted an e-mail from Johnny Ong in Kuala Lumpa. He highlighted the Malaysian game of Gasing - an incredibly skilled throwing game that makes skimming a stone a distance of 63m seem almost trivial.

Kids have played with spinning tops for hundreds of years - they are probably the oldest recorded toy - but on the East coast of Malaysia they have made spinning tops into an art form. This elegant game played at least once by anybody who has been on a pebbly beach is known by many names. To the British it is "

Skimming", to Americans "Skipping" whereas the Irish prefer "Skiffing" and the Danish "Smutting". The French, as stylish and contrary as ever, know it as "Ricochet".
Confusingly there are two World Championships.
The World Stone Skimming Championships take place in September on Easdale Island, Argyll. The main rule is that the stone (Easdale slate only is used) must be no more than three inches in diameter and must bounce off the water at least three times. The longest skim wins. The current world record is 63m.
In the US the World Stone Skipping Championships are organized by NASSA (bringing stone skipping into the space age) and here the distance traveled over the water is irrelevant, rather it is the number of skips made by the stone that counts. The current world record stands at a staggering 40!
As the NASSA website says, “NASSA promotes stone skipping as both a ‘natural’ non-competitive recreation and an internationally standardized competitive sport… a uniquely ancient activity that touches something very special in those participating”
weird web: world stone skimming championships
weird web: NASSA
weird web: video of the world record 40 skips on 'strange games the video'
strange games no:119
at 2:37 PM 5 comments:

Bull Tig is an old variation of the normal playground tig but one that is rarely seen played today. In it the chaser becomes a bull by simply bending a little at the waist, making his index fingers into horns and placing his hands on the top of his head. As the bull he can now

chase the other players, trying to jab them with one of his horns and hence give that person the chance at being the bull.

A much improved version can be played indoors, in a smallish space such as a kitchen. In fact, a kitchen environment is ideal because not only do tea towels make excellent improvised matador capes but the work surfaces can form safe zones where the bull can not strike. So players taunt the bull with tea towels or maybe slap the bull's behind before running and jumping onto a work-surface to escape his angry horns. Further embellishment can come by simulating the role of the Tercio de Banderillas in Spanish bull fighting. Here players attempt to attach clothing pegs or clips (obviously Bulldog clips) onto the bull's clothes without being gored.

The Top 5 Things To Do With Rhubarb

This post is part of ProBloggers Top5 Group writing Project

The Top 5 Things To Do With Rhubarb:

A pub game languishing in mystery and obscurity for too long. To play Rhubarb Thrashing requires only some dustbins, blindfolds and a generous selection of freshly picked rhubarb

sticks.
For 2 players. Two empty dustbins are placed, without lids, facing each other. Players climb into a dustbin and put on their blindfolds. They then proceed to hit each other around the head with their sticks of rhubarb. The winner is decided by 1 fall or a submission.
There has been much debate about whether the rhubarb leaves should be left on (rhubarb leaves are poisonous after all and so this could make the game dangerous) and also about whether players should take it in turns to strike or just wildly thrash at each other. Either way, a brilliant pub game; a treat for competitors and spectators alike.

The 8 Rules of Pooh Sticks

The Classic Kids Games Blog is having a 'How To Play...' writing competition...here is the entry from Strange Games

1st Rule: You do not talk about Pooh Sticks

2nd Rule: You DO NOT talk about Pooh Sticks

3rd Rule: When someone says, "Drop" you must release your stick

4th Rule: Drop; you can NEVER throw your stick

5th Rule: Only one game of Pooh Sticks at a time

6th Rule: Sticks must be of organic origin (but not be stick insects) and must be from the surrounding area of the bridge

7th Rule: No player shall be allowed to dismantle any part of the bridge, under any circumstances

8th Rule: The first Stick to appear on the other side of the bridge will be declared the winner

world pooh stick championships
at 7:38 AM No comments:

A Playground game from 1980’s Britain, Human Space Invaders is that rare thing - a successful computer into real-life game conversion.

Line up a group of boys against a wall, three or four rows deep. These players must shuffle from side to side (hopefully en masse) progressing forward one step only when they have shuffled a required sideways distance. The game player stands facing them from a distance of 15m or so with a collection of footballs. These he fires one at a time at the advancing hordes of invaders. Any player hit is killed and the game continues until all aliens are killed or until one or more reaches the firer.
Invading players can make the game more realistic by moving their arms from down by their sides to up above heads as they shuffle around. 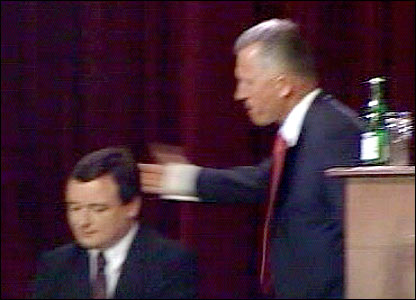 Extreme Rock Paper Scissors however is just a violent variation on the standard game, an excuse for a physical attack on your opponent.
As in the normal version each player picks the hand position representing the rock, paper or scissors except that if paper wins it is translated as a slap, rock becomes a punch and scissors becomes a poke. This changes the dynamics of the game somewhat in that players will favour one type of assault over another and hence try and win with that throw.