Some forthcoming strange events that deserve your support:-
Tetbury Woolsack Races-28th May.
Tetbury is the place to be if you want to maintain the 300 year old tradition of racing up a 1 in 4 incline with a 60lb sack of wool on your back. Races are over a distance 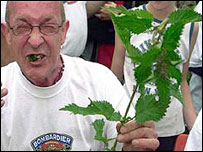 of 240 yards or until your knees give out. Ladies only have to carry 35lb!
Tetbury Woolsack race - official site
Gloucester Cheese Rolling
Strange Games don't get any bigger than cheese rolling. On the same day as the Woolsack Racing. 6lb Double Gloucester cheese, a very steep hill, crazed competitors rushing down after it. You will believe a man can fly.
Cheese Rolling official site
Australian Rock Paper Scissors - Qualifying Rounds
Throughout Australia the qualifying rounds of Rock, Paper, Scissors take place during May.
Australian RPS
World Nettle Eating Championships
Now in its eleventh the World Nettle Eating Championships are on the Saturday before the Summer Solstice at the Bottle Inn, Bridport. Competitors have one hour to see who can consume the most nettle leaves. Last years winner ate 43 feet of them!
Bottle Inn Nettles Page
The 2nd Annual World Egg Throwing Championship
World class egg throwing at Thorpe Latimer, Lincolnshire. Events include the 2 person throw and catch, knockout event, The Relay Cup 11 person egg speed relay and the Egg Throwing with Accuracy competition... for which the target will be Stupid Steve .
world egg throwing federation
Corsa dei Ceri – the Race of the Candles
Famous crazy race on May 15th in Gubbio, Italy. Seven meter high wooden candles are carried up at great speed to the Basilica of St.Ubaldo, on the slope of Mount Ingino. Even more bizarrely it is not the fastest team that wins but the one that shows the greatest 'skill'.
Gubbio's Corsa dei Ceri
British Shin Kicking Championships
Annual shin kicking event (since 1636) forms the highlight of the Cotswold Olimpick Games - held in Chipping Campden on 1st June. Wear a smock, hold onto your opponents shoulders then kick the hell out of their shins. What more do you want?
Cotswold Olimpick Games
Shin kicking Association of Great Britain - support them and make it a true olympic sport
at 6:38 PM No comments:

After my last post on Rock Paper Scissors I received a missive from one Julian Gluck (aka. The Lord of the Joust) drawing my attention to this fantastic game. Finger Jousting (or Finger Fencing) is a possibly

ancient game combining jousting and sword fighting yet requiring neither horse nor blade.
In its simplest form two players stand facing each other and clasp their right hands together as if about to arm wrestle. Then on a given command each player extends his index finger (his "lance") and battle commences. The objective is to jab your opponent before he jabs you. At no point may the players' hands lose contact with each other. This is often a lot less straightforward than you might initially think with feints, sideways moves and full body twists all yielding results. Either first to score wins or apportion different points to different body areas.
The wonderful Fingerjoust.com website describes the rules in much more detail and present a superb glossary of finger fighting terms such as:
Bobbo Lance - A straight jousting move wherein a player cocks his right elbow back towards his chest pulling his/her opponent closer.
Gesture of Good Disposition - A physical motion executed before and after every match as a sign of gratitude toward the opponent. Approved tournament gestures are handshakes, bows, head nods, and man hugs.
Maybe now is the time to find a partner and try and give each other the finger.
strange games no:115
web:the Majigger at the Mall - finger jousting video
at 8:13 PM 1 comment:

The well-known game of Rock Paper Scissors is not really strange - although it does have a fantastic World Championship. However, if

you consider yourself above it then you need to learn to play Rock Paper Scissors 101...the degree level version.
The game is played exactly like the game you know except there are 101 possible hand positions. These range from Alien to UFO, Medusa to Satan. The hand positions (fully illustrated on the website) range from the obvious to the highly skilled - "Vampire" is a particularly brilliant shape and the hand position for "Vulture" looks suspiciously like a very rude Lebanese hand gesture.
To make the game fair/random each of the selected shapes beats 50 others and is in its turn beaten by 50. For example if you choose to go with "Gun" this will "shoot Princess", "break law" and "blast apart Turnip". If you choose "Baby" this will "spill Beer", "ruin Guitar" and "be unaware of Satan" but is obviously "carried off by Robot"
Simple maths reveals there to be less than 1% chance of a tie and 5,050 outcomes. RPS 101 - a work of genius

If you want a blindfolded game for your party and find Blindman's Buff too obvious then the variant Lionhunt is a perfect recommendation. I

am indebted to Sheetswa Shawasha(Strange Games' South African Correspondent) for his description of this marvellous game.
Decide on the number of 'Lions' that will work best for the size of room you are playing in. Blindfold this player/players. All other participants will be the Wildebeest. To be so they must form a pack by making sure each is in contact with at least one other 'Wildebeest'. This can be achieved by holding hands or by grabbing a neighbours shirt, etc. Upon a command the blindfolded lions are released - it is their role to 'bring down' a wildebeest by touching it. Anyone caught is out and the game continues until one player remains. Any straggling player that loses contact with the pack is also out of the game.
Thank you Sheetswa

strange games no:113
web: hunt/kill exotic animals in Texas -from Afghan Urial to Zebras!
at 8:03 PM No comments:

Any game that involves children, animals being dressed up and wrestling and incurs the wrath of animal rights groups has surely got to be worth playing. Sheep tackling is one such game.

Simply get five sheep and dress them up in rugby shirts. Then get the players (in this case 500 children) to chase the sheep around a rugby pitch trying to wrestle them to the ground. The first group of players to successfully ground and immobilise a sheep are the winners. Sheep Tackling has been a popular half-time entertainment at rugby matches in parts of New Zealand but is now banned following criticism from The Society for the Prevention of Cruelty to Animals.