Jugger is in the class of games that have been invented for a TV show or movie but which are now being played for real. Strange Games is indebted to Linus Smid for sending in a link to the video below.
Jugger was created for the film Salute of the Jugger but has now taken off especially in Germany and Australia. It is a team game where each team tries to move a plastic skull into their opponents goals.  Only an un-armed player may handle the skull - the rest of his team mates being kitted out with swords, poles and chains to defend him from the opposing players. As the video shows, it is only slightly short of total mayhem.


Jugger from Linus Smid on Vimeo.

More than just an excuse to post a video of cool American mini golfers...The British Mini Golf Association have just published this year's tour calendar (see below and on their website here)
Thanks to Ham and Egger for the email

The British Minigolf Association can confirm the dates for ten of the 2012 season’s tournaments, including all three Major competitions. Dates, tournaments and locations of the confirmed events can be found below:

Seance Pass It On 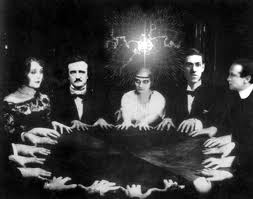 Last week's Stupid Ninja Game reminded me of a similar game which can be played by a group of people standing in a circle.  This time the group stands around a table and each person places their hands palm down on the surface. But, everyone's arms are intertwined...so your left forearm is over the person on your left's forearm and your right forearm is underneath that of the person standing on your right.  Now the game begins with one player slapping their hand on the table once.  This action ( a single slap) means the next hand (going clockwise) must also be slapped on the table. However, if someone slaps their hand twice then the direction is reversed.  If someone slaps their hand three times then the direction of flow is maintained but a hand is skipped over.  The object of the game is not necessarily to eliminate competitors that are slow or who make mistakes but to try and get the pulse of slaps, reversals and jumps going as quickly as possible.
at 9:13 PM No comments: