It's not often that Strange Games gets invited to the press launch of a brand new TV Game Show but on Tuesday this week I went to the launch of ITV2s new show A Minute To Win It sponsored by Cadbury Spots V Stripes. The show features two teams of friends undertaking a series of wacky challenges in an effort to win a cash prize. The show is presented by comedian and TV host Darren McMullen and the teams captained by Joe Swash and Caroline Flack. 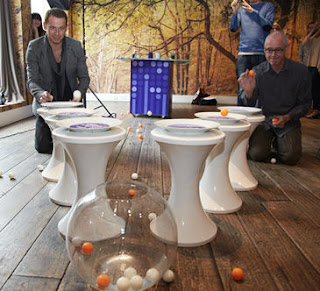 But, the stars of the show (from a Strange Games point of view) are the games. Each one is played within a 1 minute time limit. The games are a mix of tweaked classic parlour games and brand new ones. The first show featured Cherry Licker(sucking cherries off hanging strings), Knee Trembler (carrying oranges between your knees)  and Rapid Fire (firing rubber bands at stacked tin cans).  The best games were Flipper That Pancake (one player flips pancakes from scuba flippers and the team mate must catch them on a pie tin worn on their head!)  and Stirring It Up ( players transport marbles by spinning them around the inside of an upturned wine glass).
We then got the opportunity to play some of the games against team captain Joe Swash.  Triple Pong Plop (bouncing ping pong balls along 3 plates into a goldfish bowl) is a lot harder than it looks...Joe whupped me. 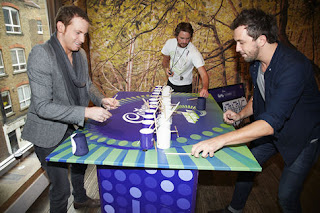 Talking to Darren and Joe it became clear that they had a real love for these sorts of games as well as strange sports like Cheese Rolling, Bog Snorkelling and even some of my favourite violent kids' games such as Slapsies and Bloody Knuckles.  Surprisingly they were both unaware of the prince of hand games Finger Jousting.   A quick demonstration later..they both whupped me.

Joe also talked about a particularly basic and beastly chasing game that he played when he was little, which I will cover in my next post.

All in all a superb launch for a good new game show.

Walter 'Bloody Knuckles' Brown has written to Strange Games to tell me of his favourite Rock Paper Scissors variations.  There are many forms of this game - I have already covered Extreme RPS, RPS 101  and Bear Hunter Princess. 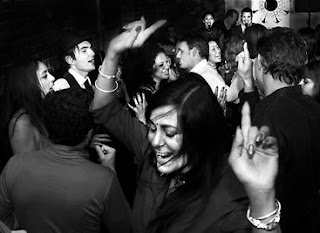 Dancing Rock Paper Scissors still contains three throws and is different from the standard game only in how each throw is created.
If you throw Drum and Bass then you drum the air with both of your hands.  If you throw Techno then you wave both your hands in the air.  And if your throw Waltz then you position your arms as if holding an imaginary waltzing partner.  Techno beats Drum and Bass which in turn beats Waltz.  Waltz, of course, beats Techno.
For the most fun play the game at your local discotheque. 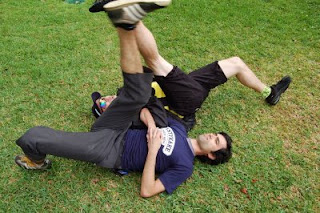 American Indian Wrestling is based upon pitting different parts of the body against your opponent’s one part at a time.  There are many different forms such as back wrestling (standing back to back and trying to push each other a set distance), one legged wrestling (standing on one leg and trying to push your opponent over), thumb wrestling and of course Leg Wrestling
In Leg Wrestling two players lie flat on their backs side by side.  They should be next to each other and touching but pointing in different directions – so the feet of one player are next to the head of the other and the players hips are touching. They then raise their adjacent legs straight up simultaneously three times.  On the third raise players should hook ankles and try and pull their opponent over.  No other part of the body is used and the non playing leg should remain flat on the floor and not be used for leverage.  Games usually last a much shorter time than Arm Wrestling and successful play depends not just on muscular strength but on stealth and speed.
at 4:26 PM 1 comment: