Strange Games inbox has been inundated by an email from James Michie who along with his colleagues Joe Kelly and Nicholas Wright run Wrong Pong competitions. The next one is being held as part of the Sneinton Festival in Nottingham on Saturday the 2nd of July. 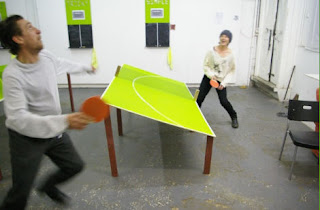 Wrong Pong has been described as a combination of Ping Pong and crazy golf.  It is basically table tennis on specially designed tables that make the ball's movement unpredictable.  So , the table might slope at some crazy angle, or have different surfaces or obstacles attached such as strips of wood.
To find out more visit the International Wrong Pong Association website.
at 11:29 AM 2 comments: