Rip Off Your Kecks

Strange Games reader W. Poole (pictured) sent in the following party game, which he insists is 'the' game to play at all the best parties:Rip off Your Kecks or Trouser Swapping as it is sometimes know in more polite circles is the ultimate party game that involves clothes.  There are quite a few of these such as the one where you have to put on an oversize set of clothes and race to the end of the room, or the Blindfold Shoe Game (everyone takes off their shoes, puts them in a pile, is blindfolded then tries to locate and put on their own!)  Trouser Swapping though is in a different league – and if played will have you in creases.
For teams of two players.  One puts on an additional pair of trousers then sits down on the floor with their legs outstretched in front of themselves. Their partners sit down in front of them again with outstretched legs and with the soles of their feet touching.  This is a key part of the game because during no stage can players lose contact with their feet. The aim of the game is for player one to take off their trousers, but rolling them down their legs and for player two to wear them (by rolling them up their legs) inside out – BUT with their feet touching at all times. This ensures a bizarre buttock shuffling game of apparel based fun.
The ideal trousers for the game are probably a pair of roomy Oxford Bags....for more advanced players the use of the skinny jean is considered particularly challenging.
at 9:18 PM No comments: 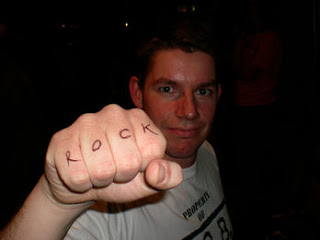 With the Olympic Games in London in 2012 perhaps the organisers will feature some home grown games.  Maybe they could spice up the dullness of Hammer Throwing by combining it with Britain's love of gardening...surely it's not too much to ask for a Lawnmower Throwing event. 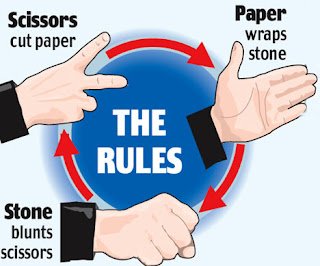 Strange Games reader and mini-golf guru Richard Gottfried  highlights the running of the UK RPS Championships.  It is to be held at the Durrell Arms in Fulham this Saturday 13th.  It's only £5 to enter which would be money well spent if you end up being the UK champion in what is essentially a random sport....or is it?
If you want to brush up on your RPS skills you could do worse than visit the World RPS Society here they detail essential strategies for victory including the 'possible':"Rock is for Rookies because males have a tendency to lead with Rock on their opening throw. It has a lot to do with idea that Rock is perceived as strong and forceful"
The 'surely that's cheating':"Tell your opponent what you are going to throw and then actually throw what you said"  and the desperate:"When All Else Fails Go With Paper"

Here at Strange Games we are slightly disappointed that they are not having categories for two of our favourite variations:
Extreme Rock Paper Scissors - If you win with paper you slap your opponent, if you win with scissors you poke them and if you win with a rock you punch them.
RPS 101 - the ultimate in hand game complexity.  A total of 101 different hand combinations need to be learned to play. An example hand position is 'baby'. This move will spill 'beer',  ruin 'guitar'  but unfortunately be unaware of 'satan'.  Visit the official 101 RPS site to play the most terrifyingly complex game ever.