I thought that I must have covered this classic and brutal childhood game many posts ago..but checking I find that I haven't! 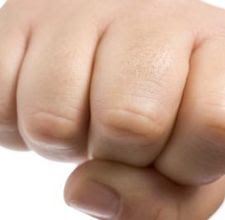 Bloody Knuckles 1
Here, players sit down at a table across from each other. One player then makes their hand into a fist and places it on the table. The other player takes a heavy coin (an American quarter, for example), puts it flat on the table then flicks it with as much force as possible at their opponents knuckles. Play then reverses and it is the first player’s turn to form a fist. The game continues until blood is drawn or one player submits or both realise they are wasting their lives and go and do something more productive instead.

The more usual version of Bloody Knuckles is the knuckular (a technical medical term) version of Slapsies. Here both players form their hands into fists and stand opposite each other, arms outstretched and fists touching. It is the aim of one player to lift their fist (no higher than shoulder height) and bring their knuckles down onto the top of their opponents fist. Obviously, it is the opponents job to pull their fist away and avoid a painful blow but they must not make a move until their opponent starts their attempt. Players can either take turns and gain points for each hit or maintain the strike if contact is made.
In the old-fashioned version of this game you are not allowed to move your hand to escape, you just leave it there to get hit then have your turn. Obviously that was just barbaric.